"I couldn’t believe Jimmy was singing about the exact things I was going through"
Back in July of this year, the Leeds-based Sage group for older LGBTIQ+ people was contacted by an American with a kind offer. KENT SEARL tells the story…
Share this story...

I have been waiting to catch Jimmy Somerville perform for a few years now. I monitor his website for information about upcoming performances and finally found one, in Leeds, for a date when I could also travel to Scotland using air vouchers for a previous cancelled flight. I quickly bought concert tickets online and hoped the rest would fall into place. It did not.

Jimmy was performing with a local orchestra, along with some other 80s artists, at an event in Leeds’ Millennium Square. I first came to enjoy his music when I was in college at Iowa State University. It was 1985-86 and I was living in a dorm when I discovered his ‘Age of Consent’ album. I was not out yet, but the lyrics were fantastically powerful. I listened so much to that cassette I had to purchase another. I’d absolutely known I was gay since the age of 13. At 18, living in the dorm, I was formulating a plan to come out in a safer environment, after I moved out for my sophomore year. I grew up in Iowa and understood coming out was going to be difficult.

I had planned for a major loss of friends, and worked with the financial aid office to make sure I could still attend college with loans if my parents stopped helping with tuition… or wrote me off entirely. The ‘Age of Consent’ album was very powerful. I couldn’t believe Jimmy was singing about the exact things I was going through. I knew I was not the only gay person on this earth, but felt empowered that here was a great musician writing potent lyrics about it, comfortable in his own skin. It helped. Iowa can feel as rural as its place on the map indicates.

I think back now, and I recognize the sex-positive lyrics of some songs helped soothe me when I was coming out in the middle of the AIDS epidemic. The thought of sex then terrified me; Jimmy’s music helped lighten that, certainly. Those lyrics still make me smile if I really think about them.

Well, I did come out. Easily. Luckily, I lost no friends, as I didn’t associate with the judgmental types anyway. My father was a different story. We had major difficulties for years but now are very close. My father now even calls my husband long-distance from Iowa to talk when I’m at work. He’s come a long way.

After college, I moved to Minneapolis, Minnesota, worked in social work for one year, then went back to school to become a registered nurse. I have worked in a local intensive care unit for 27 years since.

But back the ticket situation. I hope this hasn’t bored you. It was kind of fun writing it out in a Cliff’s Notes fashion! I’d had difficulty trying to re-sell the tickets and, not wanting the experience to go to waste, I figured there may be another gay person who’d like to see Jimmy perform. I’ve done quite a bit of activism for our community and know gifts like this can always be helpful, so I donated them to Sage and was happy to hear they arrived in time for another big fan to enjoy a free concert. Thanks for all your work with the community in the UK! 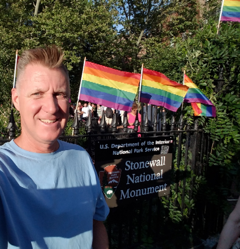 Kent at NYC/WorldPride before taking part in the alternative Reclaiming Pride March, 2019

For another story about musical inspiration in the 1980s, listen to A night out at the Gemini by Ian Nipper.

There’s more information about Sage, the group for Lesbian, Gay, Bi, Trans or Questioning people aged 50 and over in Leeds, on the Yorkshire MESMAC website.